Antenna season is upon us

The warmth of a soldering iron was indeed preferable but given that winter is closing in fast combined with rolling back to standard time from daylight savings time having pushed outside work in the daylight to the weekends, I’m probably not getting too many more “nice” weekend days.

My main wire antenna has been a Cobra UltraLite Senior. I put it up just over ten years ago and it has served me well. The Cobra antennas always need a tuner. Initially I used it on 10-160m with an LDG AT-100Pro and my IC-718 and later with a Kenwood AT-230 and my TS-830S. These tuners always found a match. With the addition of the 4-BTV I’ve primarily used it on 80m and 160m with a Dentron Super Tuner Plus and my TS-590SG. As expected, the Dentron always finds a match. (In some cases the internal tuner of the 590SG would find a match but most times I just used the Dentron.)

Over the years I’ve had a growing interest in operation on 160m and while the Cobra version that I have will work there it’s not terribly efficient. With the addition of an SB-200 to my station I was interested in improved efficiency on 40m and 80m at power levels around 500W and even though I’ll still only have 100W on 160m an improvement in efficiency would be welcome there as well. As always a wire antenna is nice to have in addition to a vertical and finally, a longer wire antenna will get me closer to what I’ll need when I’m ready to operate on the new 630m band.

My initial thoughts for replacement of the Cobra was to build an Off-Center Fed Dipole (OCFD) however after a lot of research and exchanging some emails with Brian, WB2JIX I elected to purchase one of his 240 foot open wire fed doublets. Brian was very responsive and informative in our exchanges. The information that he provided in our email exchanges and on his site, coupled with some additional reading tipped the balance.

The new antenna and feedline arrived within a week of placing the order.

Packed in the box is 240 feet of antenna and 100 feet of open wire ladder line. 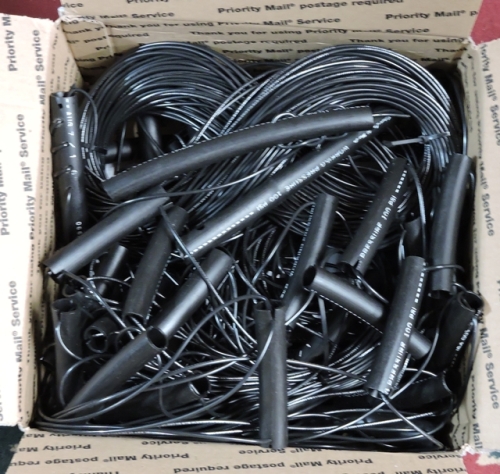 The antenna is well made out of good quality materials. One of the appealing things is that each leg of the antenna is a continuous wire from the tuner to the end of the antenna. I did the build or buy analysis and figured that by the time I purchased the wire, purchased material for the spreaders, fabricated a bunch of spreaders, and assembled the thing it would be next spring and what’s the fun of putting up an antenna when it’s sunny and warm?

In addition to replacing the antenna it was time to replace some of the rigging that supports it in the trees. While the end supports had been replaced over the years the center support was the original lines and pulley.

After a quick consultation with my friend Bob, The Boat Doctor, I purchased some nice new Harken 340 blocks (and I had one used 348.) Harken blocks are made here in Wisconsin, about 25 miles southwest of my QTH, in Pewaukee. 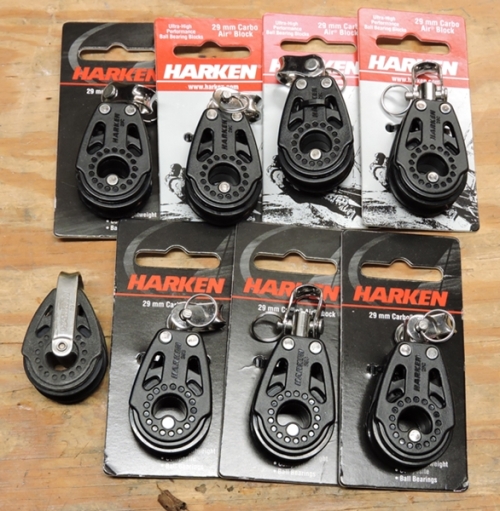 These new blocks are much lighter (at least 3 times lighter) and spin much more freely than the hardware store versions I’ve used previously. Due to their construction they will last much much longer than my prior hardware. I also laid in a supply of nice new black Dacron line.

Given that this new antenna is 100 feet longer (240 feet vs 140 feet) I had done some initial rough measurements and it appeared that I could accommodate an additional 100 feet without moving the end supports. I replaced the original halyard and center support line, and added a second center support halyard and support line so that the antenna would be pulled into the clear away from its supporting trees. Once this work was complete I laid out the antenna and feedline on the ground.

Ladder on the ground

Upon beginning the operation of raising the antenna (with the assistance of my two sons) it quickly became apparent that I had done my trigonometry or analytic geometry or some kind of math wrong. Or maybe I should have used a tape measure instead of just pacing it off. The north end of the antenna was hoisted as far and high as it would go, the center was where it needed to be for feedline position, but the south leg was sagging to about 15 feet off the ground. Oops. I hauled the south end down and after re-positioning the support line farther south and a bit higher all was well. 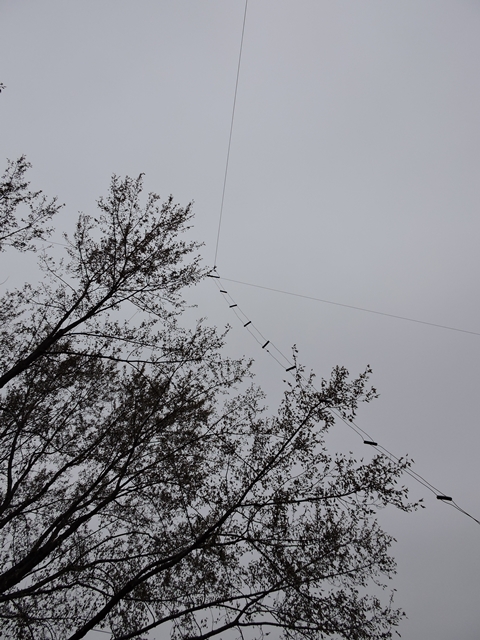 Thus far it is sitting much nicer than the Cobra ever did. The antenna wire itself is arguably lighter even though it’s 100 feet longer, as the Cobra was actually three parallel conductors (thus the Cobra.) Hopefully it will be less of a wind and snow load as well. The Cobra wire would always load up with snow and sag. Additionally, the open wire feedline is laying nicely and may arguably be less wind and snow load as well. Supposedly open wire feedlne is less susceptible to rain and snow build up. The 450 ohm window line of the Cobra was always effected by rain and snow. The SWR would always move around when it was wet.

By the time I had the initial placement complete it had started to drizzle and the sun was well on its way down. I called it a day, cleaned up, and went inside to thaw. I need to do a bit more work on the center and end points including the addition of tension relief with some additional blocks and weights. I also need to make some initial measurements and work on getting the feedline positioned. Unfortunately I’m not able to run the feedline all the way into my shack. It will terminate outside at a Balun Designs 4115 balun with the run to the shack in coax. This will need to wait until next weekend and the following week with some vacation days for the Thanksgiving holiday. I’m really looking forward to getting this thing on the air.

After a fair amount of work yesterday I was able to get my Cobra UltraLite Senior back up with some assistance. As I said in my previous post, the tree that was holding the north end of the antenna had to come down so I needed to develop a new support plan. The other trees in the area weren’t completely suitable so my XYL suggested using the post for the basketball hoop as a support for a pole to support the antenna. I was going to fabricate a pole but a little further thought resulted in the purchase of a Channel Master 25ft antenna mast. The next problem was to develop a method of clamping the antenna mast to the basketball post. After a few minutes consulting with my older son, W9KKX he suggested using back-to-back muffler clamps. I acquired a set of three 4″ clamps and three 2″ clamps and W9KKX welded them up for me.

After a little bit of paint I had three, custom pipe-to-pipe clamps: 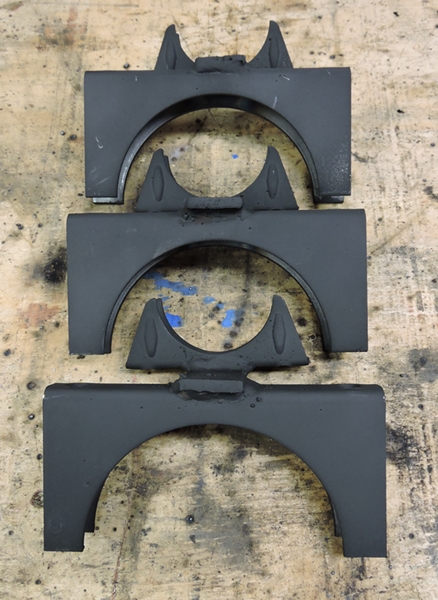 Attaching the clamps to the basketball post and in turn the antenna support mast was very simple and clean.

It was very easy to then push-up the mast by simply placing a ladder next to the basketball pole and running the mast sections up.

With the trees so close to the basketball post it actually blends in quite nicely. I placed some guy ropes from near the top of the mast to the trees behind it for support.

After replacing the halyard and support ropes in the tree at the south end of the antenna I was able to pull the antenna into position with the assistance of my younger son and one of his friends. The antenna is 140 feet long and runs over the course of about 200 feet including the support ropes in order to get the center feed ladder line positioned well. The south end is at about 35 feet and the north at 25 feet. The center feedpoint is supported with a line to another tree just to the west of the antenna. The antenna is oriented NNE to SSW.

Once the outside work was completed I went inside to check the antenna with my AA-55 Zoom and then configure the WSPRlite tranmitter for 80m. Since the Cobra UltraLite Senior is not resonant on 80m I used my Dentron Jr. Monitor to provide a match for the WSPRlite transmitter. With these preparations complete I started WSPRing on 80m with 200mW.

Over the course of the night I was watching results and comparing with some other local stations. For example the station of AA9GE is just under 200 miles south and a bit west of mine and he was getting these results with 1w of power:

A lot of the spots from Europe were US receive stations. There weren’t a lot of US stations being received by European stations with the exceptions that I found running 5w as opposed to 200mW.

WSPRing is very interesting. There obviously are a number of variables involved from propagation conditions to antennas and power. It’s not everything, but it’s something. Now that I have my Cobra UltraLite Senior back up I can do some A\B testing with my Hustler 4BTV. I’ll post results when I have them.

Now to finish up my Thirteen Colonies. I’ve got four more to go plus the GB13COL station.