A bit more on the M6

For any number of reasons there aren’t a lot of camera stores anymore so getting to see a camera before you buy it is a challenge. During my senior year in high school and for a couple years of college I worked in a little camera store called Brown Photo (later Black Photo.) We sold a lot of 35mm film cameras (Nikon, Canon, Minolta) as well as all the film-based point-and-shoots of the day. It was a lot of fun, probably the most fun job that I’ve ever had. This was well before the Internet. If you wanted a camera you went to a camera store and there were a fair number of them in those days. Not so much anymore.

One day my wife and I were driving home from a doctor appointment in a suburb of Milwaukee and on a whim we pulled into a Best Buy to see if there was a chance that they might carry some of these mirrorless cameras. To my astonishment they had quite a few, including the Canon M6. The first two things that surprised me when I held it was its size, it was a lot smaller than I expected, and second its weight\build quality. I expected a relatively light and plastic feel and that is not at all the case. This thing is well-built and has a very solid feel to it. I was impressed. The next thing that was immediately noticeable was the nice grip as compared to the M100. I was sorely tempted to walk out of the store with a camera that day but some vestigial remnant of self-control was enough to get me out of there empty handed. Plus, I had pretty much talked myself into the M100 and holding the M6 really got me re-thinking that decision. After a bit more thought and research I started to watch the used market and eventually found an M6 in mint condition for a bit less than I would have paid for a new M100.

I found these reviews helpful as I did my research:

I’ve added the following pictures in the event that they are helpful to anyone considering one of these cameras. I wasn’t prepared for the size of the camera and having some items to compare it against might be helpful.

Finally, here’s a comparison to something reasonably well-known in the Amateur Radio world: 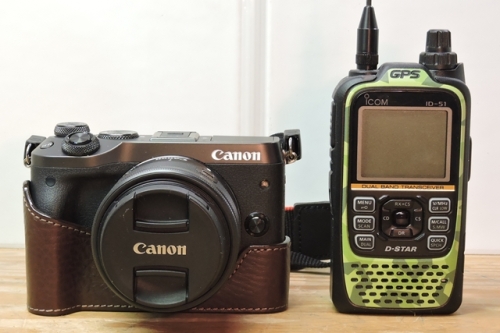 I realize that it’s not a pocket camera but when compared to a DSLR (0r even an old film SLR) the difference in size is quite noticeable. Combined with the size differences in the Canon EF-M lenses I can fit a comparable amount of equipment in about one-third the space with an appropriate weight savings as well.

In reading reviews of the camera the two biggest cons were the lack of 4K video and the lack of a viewfinder. Neither of these things mattered that much to me. I’m not a vlogger so 4K isn’t an issue. Though it’s nice that the M6 has provision for an external mic. I have a Zoom H1 that I’ve used for music that might be re-purposed if I get the urge to vlog but I’ll have to wait until my hair grows back. As for the viewfinder, thus far I’ve not been missing it. The touchscreen is more than capable but should I find the need for one Canon offers the EVF-DC2 which slides into the hot shoe albeit it is a bit pricey.

As I said in my previous post, this camera likely has more features than I’ll ever need. I especially like the connectivity with Bluetooth and WiFi. It connects to an app on my Samsung tablet and smartphone and allows control and transfer of pictures. There are a ton of exposure modes, the autofocus works very well, and the menus are well thought out and easy to navigate. Overall, I am very pleased with this camera and expect that it will serve my needs for quite some time.

It’s partly John AE5X‘s fault. John has several digital photography sites linked from his blog and I’ve been reading them for a while with growing interest. It’s been a very long time since I delved into photography at that level. Many years ago it was my primary hobby, even before Amateur Radio. I had some nice 35mm equipment and even my own darkroom equipment (though the “darkroom” was the dark basement at night with my equipment by the washtubs.) I would process my own black and white film (Tri-X and Plus X as I recall) and make prints with a Beseler 23C enlarger. I also did some color prints from slides using Cibrchrome. 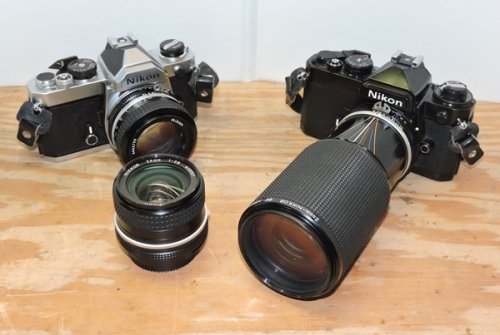 From 1981 to about 1987 I spent a lot of time at Road America and an occasional trip to Mid-Ohio photographing things like this:

Lots and lots of rolls of Kodachrome went through those old Nikons. Through this time school, marriage, and later kids happened and other than photos of kids and some canoe and hiking trips, photography sort of fell to the wayside.

Cameras for quite some time have been mostly point-and-shoot or variants thereof. In 1998 I bought a Nikon Pronea S and two lenses. This was an APS film camera. While it took nice photographs it was too late, digital was coming fast. I bought my first digital camera, an Olympus C-3000 Zoom in 2000. It had a whopping 3.4 megapixels. Quite a step down from the approximately 140 megapixels of Kodachrome. I hemmed and hawed about a DSLR and about five years ago I bought a Nikon Coolpix P600. It’s seen a fair amount of use and I’ve been quite pleased with it. It’s not a DSLR but it has served my purposes well. Woven in there were a pair of Canon point-and-shoots. the Powershot A3000. We ended up with two in order to increase the chances that you could find one of them when needed. These were nice little cameras that could easily be stuffed in your pocket and probably carried the bulk of kid photography for a number of years. And of course there was the onset of cellphone cameras. While they are cameras in the technical sense, I don’t know that they are tools for actual photography.

Over the last several months there has been a lot of time for reading and not much radio station operation. I’m not real sure why other than cancer has a way of getting your attention and changing your focus. I’ve been spending a lot of time coming up to speed on the world of digital photography. I’ve been away for a very long time and it’s been fun to rekindle thoughts about an old hobby with so much new technology. So all this reading starts one to thinking…maybe it’s time to get back into this with something other than a point-and-shoot.

As many of you are aware there is well more than a plethora of digital cameras on offer. Even though cellphones have put a significant dent in digital camera sales there are an enormous set of options for the person wanting more than a cellphone can offer. One of the newest things that caught my interest were mirrorless cameras. These were all new to me. I read a lot about the pros and cons of mirrorless versus DSLR. One of the things that appealed to me was their size. I wasn’t all that interested in a big DSLR. The P600 is nice but you can’t really put it in your pocket. Even a large pocket.

So after a bunch of thought and no small amount of research I narrowed my choices down to the Canon EOS mirrorless offerings and was mostly set to get an M100 but then found a very nice used M6. What tipped the balance? A bit more ability to control the camera combined with a very nice grip.

In addition to the “kit” lens, the 15-45mm, I have since added the 11-22mm and the 55-200mm. All Canon EF-M lenses. B&H Photo have become my new friends. They have everything you need, good prices, and ship as fast as lightning.

Thus far I am exceedingly pleased with this new camera. My first new camera with this level of control in a very long time. The size is wonderful. Much smaller and lighter than a DSLR and while it won’t fit in a pants pocket it will fit in a jacket pocket. It is packed with more features than I’ll likely ever need and it all fits nicely in a Tenba DNA 8: 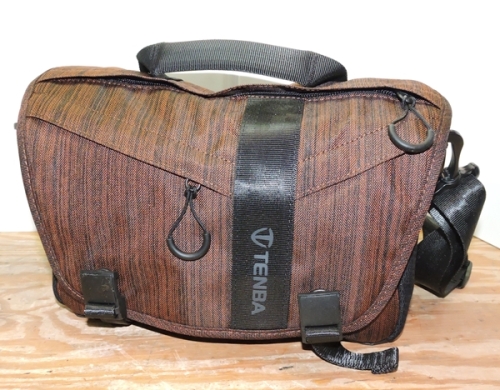 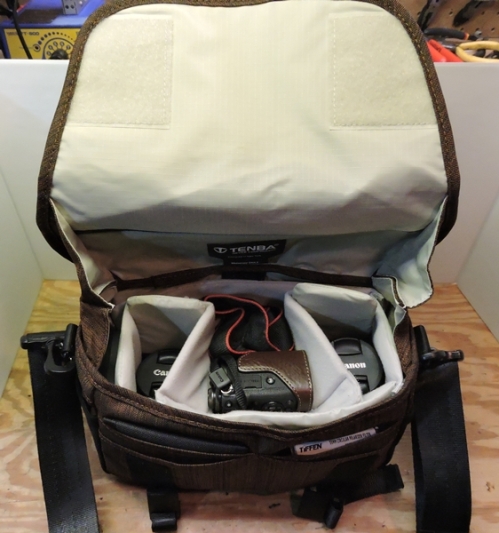 All in all much less size and weight than the old Tenba bag I used to carry around:

And a lot more functionality.

I’m glad that I waited to jump into the digital photography world. Perhaps I was waiting for mirrorless cameras before I knew that they even existed. Thanks John!

As for my health, I finished the sixth round of chemotherapy four weeks ago with some side effects but nothing overly debilitating. On our recent trip back to Mayo another PET scan was even better than the one back in December so the disease is headed in the right direction. Next step is a stem cell transplant in a few weeks. After that our hope and prayer is that I can start to string together days, weeks, months, and years without cancer. I can’t wait until summer when treatments will be over and I’ll be on the way to recovery. I’ve got a new camera to use!