Today I finished running the cables for the K9AY down to my shack so my station is now fully operational with a receive only antenna. 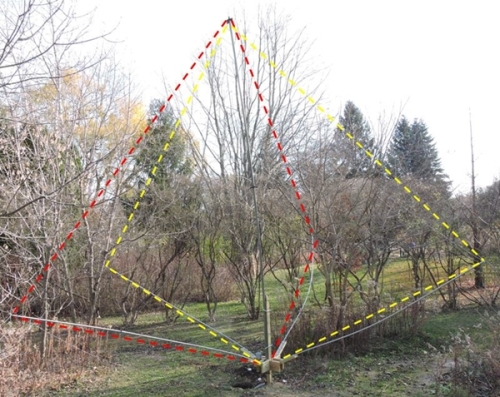 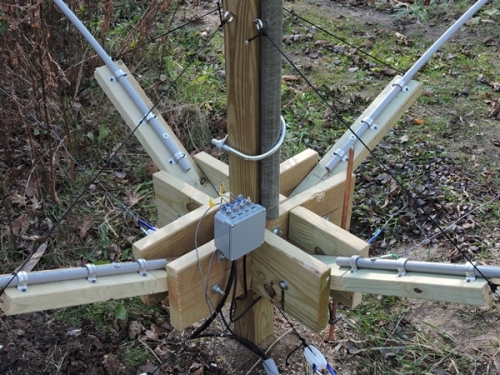 In the spring I’ll spray paint the arms some combination of brown and green so that they blend in better as opposed to the lovely gray that they are now. The arms are the only part that you can see from the house. Once they are painted the antenna will be reasonably stealthy, to the degree that an antenna comprising a 24 foot pole with two loops of 85 feet of wire supported by four 16 foot arms over a circular area 30 feet in diameter can be called stealthy.

You know what I’m going to be doing all winter.

It has been unseasonably warm here for November and it finally stopped raining so I’ve been able to make good progress on getting my antenna projects completed before winter sets in which may well be tomorrow. After a high of 64 today we’ll only make it to 34 tomorrow and stay in the mid-30’s to low 40’s for the coming week including a chance of snow tonight through tomorrow morning.

My Hustler 4-BTV is now complete. I used the DX Engineering radial plate and their Tilt Base mount as well. 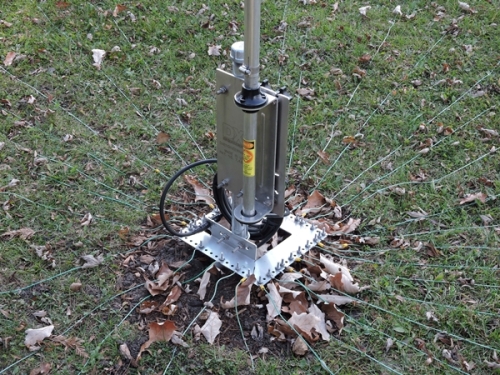 The DX Engineering parts are very well made they definitely enhance the installation of the 4\5\6-BTV antennas from Hustler.

The antenna is fed with Belden 8267 and I formed a common mode choke at the base with a length of the feedline. This resolved the problem of some RF coming back into my shack as evidenced by the video of one of my monitors modulating with my transmission.

Even though the DX Engineering radial plate is drilled for 60 radials I went with thirty 30 foot radials for now. They all are stapled in for winter, ready to blend into the grass come spring.

I continue to be very pleased with this antenna. For my needs it provides very good results for the money.

The weatherman was correct:

It’s been a busy few weeks of growing antennas before the onset of winter, which actually is officially antenna season. No one works on antennas when it’s warm and dry. Antenna work is supposed to be done when it’s cold, wet, and hopefully snowing. I admit to being non-compliant to this long standing tradition.

All of the mechanical and electrical work is complete for the antenna. In order to enable folding I elected to forego the multi-conductor connector for the antenna legs and borrowed an idea from Andrew, VK1AD and his linked dipole design and chose to use bullet connectors. a carabiner, and a slightly modified plastic electric fence egg insulator for each leg of the antenna. The carabiners and egg insulators aren’t as nice as Andrew’s sister clips but they’ll do for now. 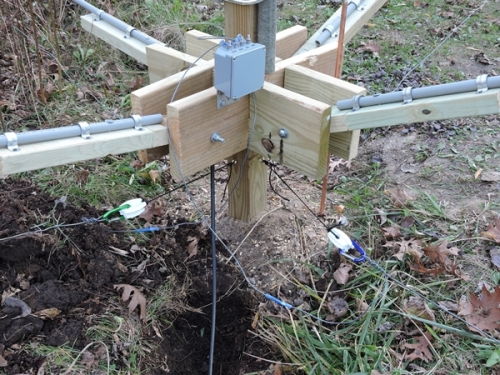 Next was the task of getting the cables back to the house. It’s a run of about 250 feet which is way more than I was going to dig with a shovel. I rented a self-propelled bed edger that has an attachment for trenching dog fencing wire and ran a trench from the antenna location back to the house.  The trencher worked great and made a nice 5-6″ deep trench. 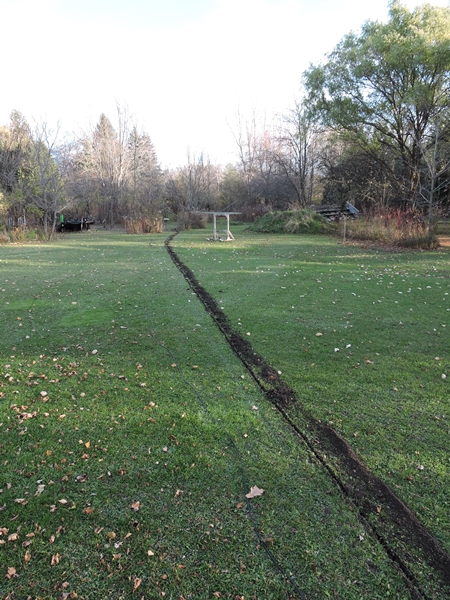 I laid the control cable and the feedline next to the trench and worked out all of the coils so that they both lay nice and flat in order to drop them cleanly into the trench. With the cables in the trench I completed the electrical connections at the antenna.

The cables for the antennas enter through a port on a workshop portion of our garage. From there they will make their way to my shack in the house. It was late in the day when all of this work was complete and I wasn’t going to have time to get the cables to the radio but I could get the radio to the cables. I hauled by TS-590SG up to the workshop, connected the K9AY control box to the control line and feedline from the antenna, and then connected the output to the radio, and lo and behold IT WORKS! I sat out in the workshop as the sun was setting and tested with stations on 40m, 80m, and 160m in addition to DX-ing AM broadcast stations from all across the country. The switching works fantastic! It’s really cool to be able to electrically rotate the antenna to hone in on a signal.

Thus far I am very pleased with the results but there’s still more work to do. I need to properly terminate the cables from the antenna in the workshop and make the runs to the shack. Once this is complete the K9AY will be a very useful tool as winter closes in and the low bands open up.

As I was DX-ing the AM broadcast stations I was reminded of Jean Shepherd and a few of the shows (for example, 1971 02 xx DX Ham Radio CW)  in which he talked about his dad and his old receiver. Imagine if he would have had a K9AY!